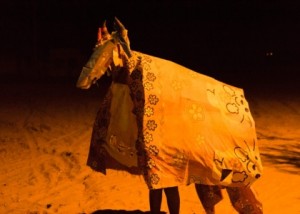 Velho Tonho connects with places that not everyone can reach. He travels far, solitary, persistent. He stays committed to his own singular trajectory.

This is how he became deeply immersed in the Reisado, or Three Kings’ Party, in his region, when he learned the traditional songs through people who came to live in Tatajuba for a time. Today he leads the group in his own way, with his lone voice and tambourine, but absolutely persistent.

Who could play with him, following him and taking the Reisado around the sandy streets of Tatajuba? The children. Yes, only the children and Velho Tonho embark on this game, and they are welcomed by the smiles of the people. The bull, the goat, the hunter, the old lady, the donkey, all the characters are acted by the barefoot (or nearly barefoot) children. Every thing is made with “what’s possible,” as they say. They use buriti stems, cardboard, old sheets, rope scraps. The masks are made of cardboard or old shoes cut in half. What matters is to keep on making, playing, singing. There is no right time. The Reisado takes to the streets when the urge to play appears. Games were in high demand due to our presence, and so was the Reisado as a result. We saw it parade down the street twice in 40 days, and there was a rehearsal the day before each one.